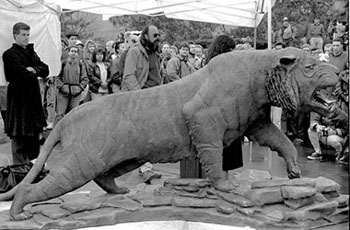 On November 10, 1989, sculptor Duff Wehle unveiled the Bronzed Bengal Tiger Statue located on the Quarter Mile, across from what is now known as the Eastman Quad. Commissioned by RIT students, the tiger statue is a representation of SpiRIT, the Bengal tiger cub RIT adopted as its first mascot in 1963. Tiger sculptor, Duff Wehle, said during the dedication ceremony, “Through joint efforts of these people — foundry craftsmen color artists — we have provided a bronze statue of RIT's mascot. Now it is up to all of you here at RIT to breathe life into it.”

During the same time, the College Activities Board held a contest to name the new mascot. It was then that author, Rick Mislan, entered the name "RITchie" in his own name. After a vote, "RITchie" was selected to be the new mascot name.

Rick won a $50 gift certificate from Campus Connections, where he promptly picked up his check from John Roman and purchased a new RIT men's hockey jersey!